Brian Patrick Carroll (born May 13, 1969) better known by his stage name Buckethead, is a virtuoso guitarist and multi instrumentalist who has worked within several genres of music. He has released 36 studio albums, four special releases and one EP. He has performed on over 50 more albums by other artists. His music spans such diverse areas as progressive metal, funk, blues, jazz, bluegrass, ambient, and avant-garde music, making him one of the most prolific of modern musicians.
Buckethead is famously known for wearing a KFC bucket on his head, emblazoned with an orange bumper sticker that reads FUNERAL in capital black block letters, and an expressionless plain white costume mask. He also incorporates nunchucks, tap solos and robot dancing into his stage performances.[2][3][4]
An instrumentalist, Buckethead is best known for his electric guitar playing.[5] He has been voted number 8 on a list in GuitarOne magazine of the "Top 10 Greatest Guitar Shredders of All Time"[6] as well as being included in Guitar World's lists of the "25 all-time weirdest guitarists"[7] and is also known for being in the "50 fastest guitarists of all time list".[8]
Buckethead performs primarily as a solo artist. He has collaborated extensively with a wide variety of high profile artists such as Bill Laswell, Bootsy Collins, Bernie Worrell, Iggy Pop, Les Claypool, Serj Tankian, Bill Moseley, Mike Patton, Viggo Mortensen, That 1 Guy, and was a member of Guns N' Roses from 2000 to 2004. Buckethead has also written and performed music for major motion pictures, including: Saw II, Ghosts of Mars, Beverly Hills Ninja, Mortal Kombat, Mortal Kombat: Annihilation, Last Action Hero, and contributed lead guitar to the track "Firebird" featured on the Power Rangers Movie Soundtrack.
guitar lessons in south shields www.rock-licks.com
Posted by James Rundle at 22:36 No comments: 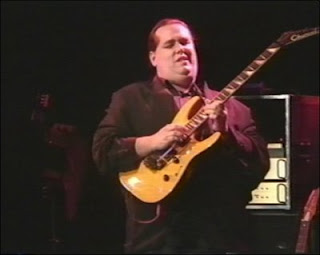 Shawn Lane (March 21, 1963 – September 26, 2003) was an American musician who released two studio-albums and collaborated with musicians, such as Ringo Starr and Jonas Hellborg. After studying the piano, he rapidly mastered the guitar, which he played with exceptional speed. The magazine Guitar World wrote, "Few, if any, guitarists can play faster than Lane could, and his arpeggio sweeps and precision-picked lines blasted more rapid-fire notes than the average human mind could comprehend.
guitar lessons in south shields www.rock-licks.com
Posted by James Rundle at 22:27 No comments:

Martin Adam "Marty" Friedman, (born December 8, 1962) is a guitarist, well known for his tenure as the lead/rhythm guitarist for heavy metal bandMegadeth, which lasted almost a decade. He has resided in Shinjuku, Tokyo, Japan since 2003, and has[1] hosted his own television programs, Rock Fujiyama and Jukebox English on Japanese television.
south shields guitar lessons www.rock-licks.com
Posted by James Rundle at 22:20 No comments:

Jennifer Batten (born November 29, 1957) is an American guitarist who has worked as both a session musician and solo artist. She has released three studio albums: her 1992 debut, Above Below and Beyond, was produced by former Stevie Wonder guitarist Michael Sembello. In 1997, she released the worldbeat-influenced Jennifer Batten's Tribal Rage: Momentum. Her third album, Whatever, was released in Japan in September 2007 and worldwide on April 18, 2008.
In 1983, at the age of 25, Batten auditioned for Michael Jackson's songs "Wanna Be Startin' Somethin'" and "Beat It". Although she lost out to Eddie Van Halen for the guitar solo in "Beat It", Jackson chose Batten for guitar on "Wanna Be Startin' Somethin'". Batten would go on to support Jackson for ten years on all his major world tours, including reproducing perfectly Van Halen's performance in the studio recording of "Beat It".[citation needed].
Batten has appeared on recordings such as Jeff Beck's Who Else! (1999) and You Had It Coming (2001), Michael Sembello's Heavy Weather (1992), Bret Helm's "Doc Tahri" and the debut of The Immigrants. Her music video appearances include Jeff Beck, Michael Jackson, Natalie Cole, Sara Hickman and Miguel Mateos's "Obsesión".
Batten played lead and rhythm guitar on Michael Jackson's Bad (1987), Dangerous (1992) and HIStory (1996) world tours, as well as his 1993 Super Bowl half-time performance.
Between 1994 and 1999 Batten joined Dave Rodgers and Domino as featured guitarist on the eurobeat songs "Sun City", "Music For the People", "Fly" and "Woa Woa Woa." Her writing and performing is uncredited in several other songs under the A-Beat C label.[citation needed] Her live Eurobeat appearances were limited to playing at the Tokyo Dome with Dave Rodgers and Queen of Hearts.
In 2010 she recorded a solo for the song "Bad Girls" for a Polish singer Doda.
Posted by James Rundle at 22:15 No comments: 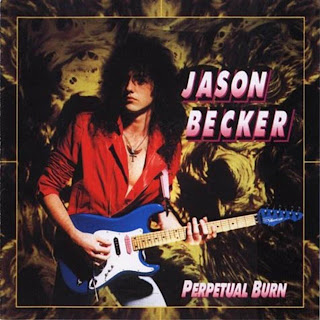 Jason Eli Becker (born July 22, 1969) is an American neo-classical metal guitarist and composer. At the age of 16, he became part of the Mike Varney-produced duo Cacophony with his friend Marty Friedman. They released Speed Metal Symphony in 1987 and Go Off! in 1988. Cacophony broke up in 1989 and Becker began doing solo work, having released his first album Perpetual Burn in 1988. He later joined David Lee Roth's band and recorded one album with him. However, Becker's success was hampered by his then-diagnosed amyotrophic lateral sclerosis (Lou Gehrig's Disease) and he was given three to five years to live. In 1996, Becker eventually lost the ability to speak and now communicates with his eyes via a system developed by his father. Despite his disability, he continues composing by using a computer and has since released Collection, a "best of" album of his favorite songs and three new songs.
guitar lessons in south shields www.rock-licks.com
Posted by James Rundle at 22:11 No comments: