Is Self Taught The Best Way?
Many guitarists wear the ‘Self Taught Badge’ with pride. Claiming to be self taught creates the illusion that you thought of everything all by yourself.
If you don’t have a guitar teacher you will no doubt have to look into guitar teach books which on your own can be quite difficult to understand. Knowing someone who already plays guitar is the next place to pick up information about how to play.
All of this is a bit random and a bit of trial and error approach. You wouldn’t go to a self taught heart surgeon who learned his craft through trial and error!!!
Getting lessons from a good teacher will help you progress much faster.
Example: I have a 12 year old student with no past experience on guitar. The student has had 5 lessons and can now play all Major, Minor and Seventh Chords in open and barre chord positions.
Would that be possible by self teaching?
Jimi Hendrix Didn’t Read Music He Just Had Natural Talent!
‘I don’t have the natural talent’ is often the excuse of the under achieving musician.
It’s a bit misleading t believe that just because someone doesn’t read music that their musical ability must be therefore be natural God given at birth.
Many rock musicians don’t read music but they learned chords and scales. They also know where the notes on their instrument are too.
Always Practice Sitting Down?
Last time I looked most guitarists perform standing up! BB King has earned the right to sit when playing. But would Slash at the end of the November Rain video looked at half as cool if he had of walked out of the church and took a seat before he played the outro solo!!!!!!!
We all fall into the trap of practicing sitting down then have difficulty playing our stuff when standing up.
Practice Without Plugging Into Amp?
These days luckily for my neighbour’s guitar amps come with headphone sockets.
Too many times we practice a solo unplugged only to find when we plug into our amp with Metal Insane setting and it all sounds like a horrible mess.
The Rock guitarist by definition wants to show off. To show off you need to be loud!!!!!
Identifying the Repeated Chord Progression
You have your song and chords sheet. But you can’t memorize the song. Only with the sheet of paper can you possibly perform it????
Will you memorize D C G D D C G D D C G D D C G D ??? Which is a 16 chord sequence.
Or will you read it as (D C G D) x4  A lot easier.
Too many beginners aren’t told that a song is a series of repeated chord patterns.
Many songs are Verse Verse Chorus Verse Chorus Chorus.
Each verse has the same chord progression. The Chorus is the same every time its played.
There’s So Many Chords To Remember!!
As a beginner guitarist you’ll be taught to memorize chord shapes. There are so many shapes in your chord dictionary it won’t be long before your brain has turned into scrambled egg.
Seriously take my advice check out the CAGED system. In simple terms all chords can be worked out from the simple shapes of the C Chord A Chord G Chord E Chord D Chord.
It’s well worth asking your guitar teacher about it. You can burn that chord dictionary.
Scales Are Boring!!
Scales are boring if you just run up and down them endlessly.
Start out with pentatonic and blues scale and learn how to make a blues solo. Suddenly scales are cool.
South Shields Guitar Lessons www.rock-licks.com
www.rock-licks@live.com
Posted by James Rundle at 20:16 No comments:

guitar lessons in south shields www.rock-licks.com
Posted by James Rundle at 14:11 No comments:

The CAGED Guitar System Explained
The CAGED guitar system can be very useful to help you find your way around the fretboard. The idea is based on the relationship between common major chord and major scale shapes. It is also a very useful method for visualising chord tones across the neck of the guitar. If you can easily find the notes on the fifth and sixth strings of the guitar then all it takes is a bit of practice with the CAGED system and you will be able to find any major chord tone very easily anywhere on the neck. There are two main things you need to learn. The first is the order of the chords always remains in the same sequence C A G E D starting from the C or if you were starting from the G then the order would be G E D C A because after the D chord it starts over again from the C. This makes more sense when you can see it in diagram form as shown below.

Study the picture above and note how the five chord patterns overlap with each other. Once you get used to visualising the CAGED chords across the neck like this you will find chord tones very easy. Don’t forget the order stays the same, G will always overlap with E etc. The next picture shows the same CAGED sequence starting from a different place to give you the idea.

The CAGED system also helps us with playing the major scales. As you have seen in the example above it’s quite easy to get used to the finding the chord tones anywhere on the neck as long as you can quickly find the root notes on the guitar strings. When you learn the major scale positions for the guitar it is a lot to have to remember. This gets even harder when you have to think about these positions in twelve different keys. By combining the major scales with the CAGED sequence of chords this task becomes much easier. By getting used to the relationship between the chords and the scales you will start to realise that remembering these scale positions and being able to find them in any key becomes a lot easier. Study the diagrams below and practice playing with these chord shapes and scales across the fretboard. It might seem a lot of work at first but you will get used to it quite quickly. The CAGED guitar system is a great method to help you find your way around the neck so keep at it and in a few months you should playing the guitar without thinking.

My name is James Rundle a guitar player with 25 years playing experience. Based in South Shields

My aim to is to take the mystery out of playing guitar and simplify what seems complicated.

Styles range from Oasis to Metallica and Van Halen to Hendrix

Posted by James Rundle at 16:16 No comments: 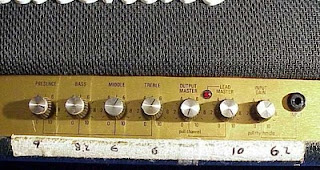 
SMELLS LIKE TEEN SPIRIT on a line 6 spider amp

DEEP PURPLE - SMOKE ON THE WATER


GUNS AND ROSES - SWEET CHILD OF MINE

JOE SATRIANI - SURFING WITH THE ALIEN

Dave Murray of Iron Maiden
Drive - 7
Treble - 9
Mid - 7
Bass - 4
Reverb - 0
Use your brigde humbucker - I find this tone to be excellent for Maiden - The Trooper, Hallowed especially

Use a thick heavy distortion with medium tone and a lot of sustain.

Ray Davies of The Kinks

Billy Gibbons of ZZ Top
Treble: 3
Middle: 10
Bass: 10
Prescense: 10
Gain: about 5 (crunchy type of sound)
Use a Les Paul guitar with not to much output in the pups and select both!

Boost clean channel with an OD
Tone: 5-6
Volume: 5-8 (have it boost the volume of the amp a little)
Distortion: 0