I was lucky enough to have tickets to see Uli Jon Roth live at Newcastle Forest Hall Legion Club.

For those who don't know of this great guitarist
Ulrich Roth, more commonly known as Uli Jon Roth, is a German guitarist and one of the earliest contributors to the neo-classical metal genre. He is also the founder of Sky Academy and inventor of the Sky Guitar.
Recorded 4 studio album with the Scorpions between 1974 and 1977 as well as The Tokyo Tapes 1978 released live album.

The Monday night gig kicked off with some early Scorpions material that had the place rocking. You really felt you were in the presence of someone a little bit special.
The young 17 year old guitarist was a surprise added bonus to the band as was the power house vocalist who was reminiscent Joe Lynn Turner (Rainbow)
Probably the best local gig I've ever been to finished with Hendrix covers of All Along The Watchtower and Little Wing.

Special mention to the support band Russ Tippins http://www.russtippins.com/gigs.html who were amazing too.

The photographer Adam Kennedy took some amazing pictures worth checking out https://www.facebook.com/akennedyphotographer 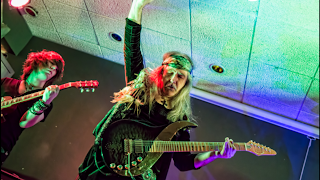 Posted by James Rundle at 18:03 No comments: